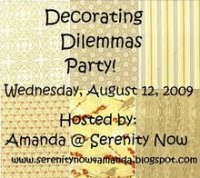 Today I'm joining in the Decorating Dilemmas Party over at Serenity Now with Amanda!
Here is my Decorating Dilemma:
What to do with the wall space above the table in our upstairs landing.
This landing is where the bedrooms are off of, so I'd like something lovely to look at when passing by, but what?? 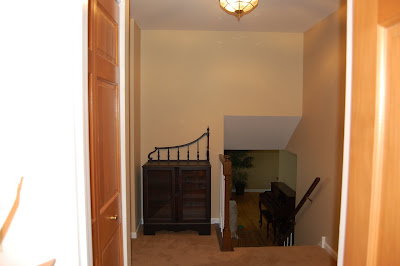 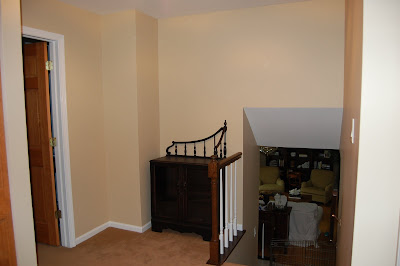 There's quite a bit of wall space there, so should I just focus on immediately above the table, or should I use some of the surrounding wall area too??
Any suggestions as to what to hang there?
A mirror?
Wall words?
Old ancestral photos?
A pretty piece of art?
One thing or many?
Hung symmetrically or just a collage?
Help needed, please!! This is one spot in our new house that has me going back & forth, unable to decide! Thanks!! :)

Posted by Stacey @ The Blessed Nest at 11:07 AM 30 comments:
Labels: decorating 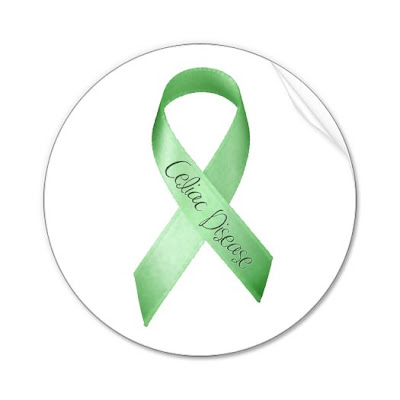 {above awareness sticker from www.zazzle.com}

.....When You Have A Chronic Illness.


If you have been reading my blog for a while, then you know that my passion is inspiring women to Create Welcoming Homes! You may have seen a recipe or two that were gluten-free as well. But I've never shared with you my story. And I had done this on purpose. Ain't no disease out there that's pretty, people. However, I know that there are millions of women out there who have a chronic illness of some kind, who desperately want to Create A Welcoming Home for their family even though it may be difficult, and just might be inspired to know that they are not alone. And that's why I'm sharing with you today.

(And if you are blessed to be healthy, then read on anyway...it may give you an understanding heart for a friend.)


Hello, my name is Stacey...and I have Celiac Disease.

I was blessed to be a happy, healthy child and teenager. I was active & energetic through college, when I first started noticing that something was definitely wrong with me.
I started to drastically lose weight. I had always been thin, but doctors were stumped. A couple of months later Hubby & I were engaged, & I had gotten down to 100 lbs, was drinking 3 "shakes" a day full of calories to put on weight (SO disgusting, by the way), eating non-stop, and could.not.put.on.weight.

They did all sorts of tests, checking everything from full-panel bloodwork to check my thyroid or for anemia, all the way to drinking barium and having scans done to check if I had cancer. Nothing showed up.
They said that they didn't know. And chalked it up to stress.

Fast forward a year, literally just after our 1 year anniversary.
I had gotten terribly sick with "the flu". I couldn't keep anything in me, was passing out from dehydration, and had gone to the ER twice already. I was taking a medicine cocktail of several different things, but nothing was working.
I was having diarrhea up to 20 times a day. And I knew for sure that my husband of one year would keep his vow and love me forever "in sickness and in health" when he quietly and lovingly cleaned up a messy bed and mattress when I was too sick to even wake up to make it to the bathroom.
A week in the hospital, a colonoscopy, some unsure signs and symptoms, and once again....doctors said "I don't know" and sent me home. It took another 3 weeks before I was better.

In the years that followed, I had been told "I don't know" and sent on my way more times than I could count.

After my daughters were born (only 15 mo apart), I couldn't shake the tiredness and nausea that I had felt during my pregnancies. I felt sick to my stomach much of the time, and was exhausted, but we thought maybe it was just hormones out of control. But, it didn't go away after I gave birth.
In fact, it had gotten worse.


By now, my days were filled with 2 little babies...and then as time passed, 2 little toddlers...draining what little energy I had out of me. I spent most of my time at home on the couch, trying to get a migraine to go away, or trying not to throw up, or trying to catch a few minutes of sleep since I was just always so exhausted. Some days were pretty normal, and some were not. I put on a happy face for the world to see. Friends and family were mostly unaware that I felt so badly. Who wants to hang out with a "sicky"? I got really good at faking like all was well.

I had to teach my husband to cook, since I could no longer function well enough to do that everyday anymore. Some days I'd be so ill that I would tell my toddlers to "bring Momma a bowl and bring me some cereal/or a snack, and I'll pour it for you". I cried a lot about that.

After having finally had enough, I cried when I went to an allergist who said that I was allergic to several things, one of which was wheat. Praise the Lord! Finally, an answer!! After some more testing during the next 2 years, I was officially diagnosed by a gastroenterologist as having Celiac Disease.

How am I better now?
Well, I eat Gluten-Free. It's the only way to stay healthy. Gluten is the protein found in wheat, barley, & rye, and oats are avoided due to contamination issues as well.
I still have some health issues due to being undiagnosed for so long (around 10 years). But overall, I am lightyears better than before!
(for more info: www.celiac.org)


Why am I sharing this with you??

Honestly, I didn't really want to. But it was on my heart to share anyway!

I do want to encourage many of you out there who do have health problems, yet desperately want to create a haven for your family. You want a Welcoming Home! But I know that it may be harder for you than for others. I know. I understand. And I want to tell you that
"You are not alone!"

It is very possible to Create A Welcoming Home!
It takes LOVE, most of all. That's what your family needs most!!
Do what you can, when you can, the Lord knows your limitations & your strengths.
Don't fall into the trap of blaming your illness for not doing anything around your home.
Keep things simple & easy. De-clutter & simplify in every area.
Your "to-do list" for the day won't look the same as most people's list, and that's ok.


Whether it's arthritis, migraines, chronic fatigue, fibromyalgia, diabetes, cancer, celiac disease, etc. know that you aren't alone...that I care...and most of all that God cares about you!
If you desire a Welcoming Home, then He will honor that desire!!

Find a Bible verse that gives you encouragement!
Here's one of mine:
"...Man does not live on bread alone but on every word that comes from the mouth of the Lord". Deut. 8:3

Thanks for listening to me today! I know that this varies from my usual posts, but it was on my heart!

For more encouraging posts, check out (in)courage, a new incredible website, like a little home away from home, all for encouraging women!

Posted by Stacey @ The Blessed Nest at 9:32 AM 39 comments:
Labels: creating a welcoming home, this is my life 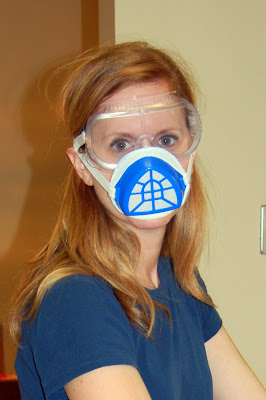 Since I didn't have enough projects I'm working on already (LOL!), I decided that today was the day to demo the soffits above our kitchen cabinets. Our very 1983, very ugly, very short kitchen cabinets. In the tiniest kitchen I've ever had.

Are you starting to get that I really REALLY don't like my new/old kitchen?!
Begin Phase 1 in my kitchen re-do!! 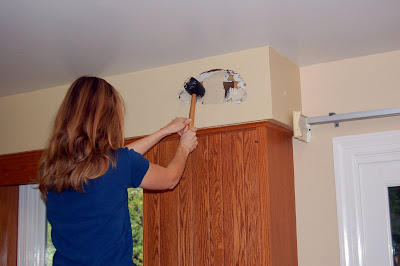 Oh, do I ever have plans for this space!

New cabinets and appliances aren't in our budget for now, so I'm going to give this kitchen a major facelift with lots of DIY elbow grease!!
Paint, new lighting, some pretty fabric, and cute accessories...oh, my!


I seriously could not stand looking at this sad, sorry kitchen for one more day -- Something drastic had to be done!! 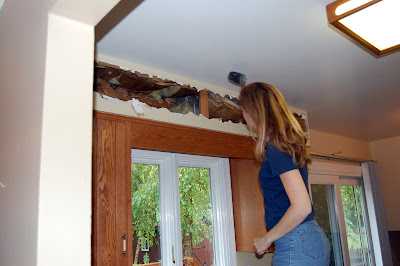 Hubby and I knocked out the drywall and wooden drywall supports. It took quite a while to get all of the nailed in supports out, along with the insulation above from the attic since our kitchen is on a single-story level.

{*If you are thinking of doing this yourself, just know that it CAN be done! You'll have to be very careful though, because electrical, water lines, vents, etc can be lurking behind those soffits! They say to make a hole or two and peek inside to see what is there before removing the whole thing. Just so ya know!*} 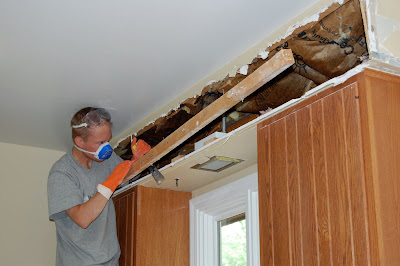 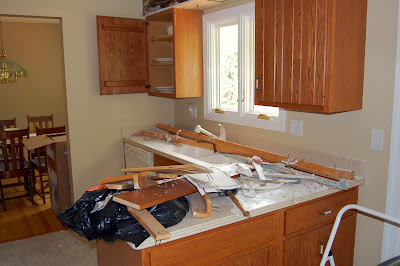 On side #2 we got smart and taped up a tarp to minimize having to get drywall bits from behind the appliances!

Here's Hubby almost done with this side!! 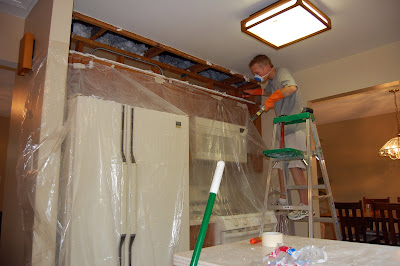 
{ still working on my many projects to show you during this next week :) }

Have a wonderful Day Of Rest tomorrow! 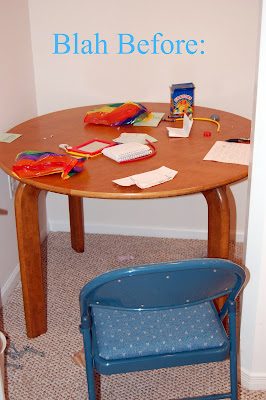 Working on this Blah Before table & transforming it into the Arts & Crafts table of my kids' dreams!

Getting bamboo roman shades for our Master Bedroom.

Working on a Responsibilities Chart for my girls.

Eating a Snickers Blizzard from DQ. Because ice cream makes the work go faster, right?!! LOL! DQ really should make me their spokesperson. I'd gladly take payment in form of more Blizzard-y treats! :)

Choosing to be Thankful...even when it seems hard to find thanks.

Planning to blog about these things soon! Except maybe for the Snickers Blizzard. Unless y'all are just dying to see me eating a Snickers Blizzard! And really, I'd probably be so excited to eat said Blizzard that by the time I remembered my camera to take a picture all you would see is me holding an empty cup! So, let's not count on it, shall we! :) hehe!! 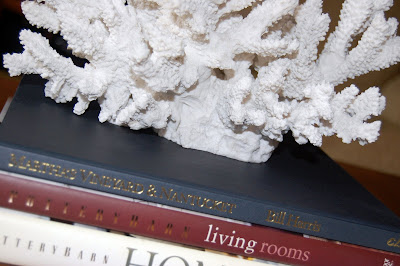 What did you do this weekend?

I spent Saturday afternoon organizing the furniture & bookshelves in our new living room!

This is true "use what you have" decorating in this space!!
I only used things that we already owned, and so far so good! We have all of the major furniture pieces, except a rug. And I have a little something (actually 2 little somethings) that will be added to the bookshelf later on 2 of the middle shelves with only a small out-of-pocket expense! 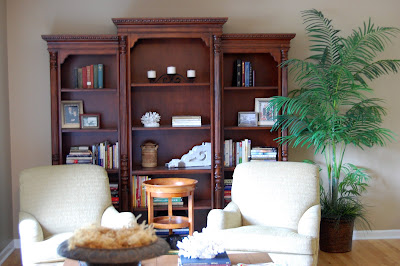 I used to be unsure of how to decorate bookshelves so that they looked "pulled together" and not like a jumbled mess.

Once I figured it out though, I have "decorating-the-bookshelf-fear" no more! :)

Here are a few easy pointers to Organizing Your Bookshelves:

{I haven't decided what day of the week I'll be doing the "Organizing 101" series yet....so it may switch a couple of times till I find the perfect day!}

Welcome, I'm so glad that you came to visit! Sit down, relax, and enjoy some home & heart inspiration! I love to share about decorating, fun projects, entertaining, messages from & to the heart, and Creating a Welcoming Home! Please leave me a little comment to let me know you were here, and come back to visit anytime!